I connected with Tim Page, Powell’s biographer and champion; I can only think she would have hand-picked him if she’d had any say in the matter, his writing is graceful, witty, and incisive. He’s also wonderfully kind and thanks to him, I was able to speak with one of Powell’s surviving nieces, Carol, who lives not that far away in Ohio. Every time she said, “Aunt Dawn” I felt a chill. “I always loved that play, Jig Saw,” she said. “We are so delighted that you’re doing it!”

It was evident that Carol is crazy about and proud of her aunt, and I’m hoping to meet her before the run is out. When I have pix, I’ll post.

At the read-through last night, we laughed a lot; there are many funny lines. But on the way home, I remembered the famous line (attributed to a bunch of actors on their deathbeds, but I heard it was David Burbage, who only theater geeks will recognize), “Dying is easy. Comedy’s hard.” Powell’s brilliant writing can’t be the whole show. The audience has to care about the characters,  they’ll have to fight for things, and we’ll need to be in suspense as to who will win the little battles that happen in every scene.

But thank you, Internet. I stumbled upon this excellent Gerald Howard piece, “How Dawn Powell Can Save Your Life,” which opens with this Powell quote:

Given that, not sure whether I should with you a vanity-free or vanity-full weekend, but I trust we all get what we deserve.

When I started to think about directing onstage, I wanted to do a period show, preferably one set in New York.

All along, two sources of inspiration kept popping into my mind. #1:

Kay Thompson’s Eloise at the Plaza, indelibly illustrated by Hilary Knight, screams louche New York hotel living. Years ago, I saw a young girl’s bedroom inspired by the series; the designer had simply taken permanent markers and drawn stripes and squiggles on the walls. I’m a big fan of set design that evokes rather than reproduces; why not create a 30s hotel room by drawing a mirror directly on the wall rather than scrounging around for a real one? 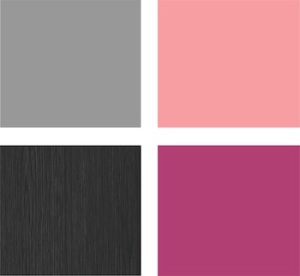 (I’ll go for a redder red over the fuchsia; I love the clash.)

In reading Powell’s diaries, I came across this observation when she attended a 1931 performance of Camille with Eva LeGallienne:

“The thing is romantic and needs to be overplayed. Modern sophisticated acting and naturalistic reading of lines only emphasizes the highly artificial plot. It is theatrical and should be played theatrically.”

It’s a sentiment with which I mostly agree. Theater is inherently fake, and so embrace that. Don’t play the theatricality down, play it up. Hence, my utterly unrealistic color scheme: principally black, white, and grey, with pink for the men and red for the women, who are much more aggressive. Anyway, more on costumes soon.

The other image that lingers in my brain is this one: 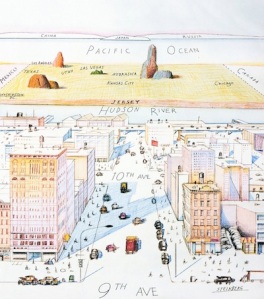 The script specifies a view of Central Park. Instead of painting the flat to look like Central Park (which will end up being some green thing that doesn’t look like much of anything), we’ll do a cartoon version inspired by Saul Steinberg’s iconic New Yorker cover drawing. As our Del said, “The audience will walk in and immediately realize not to take it too seriously.” Exactly.

Finally, as I looked yesterday at the very rough sketch I’d made based on the stage set directions in the script, I was struck by one thing: “The room has a triangular shape.” The play is crammed with triangles: Claire/Julie/Nathan, Del/Claire/Nathan, Letty/Frank/Ethel just for the romantic ones. Then there are power struggles, and more stuff I may talk about later. Powell’s humor itself is angular and pointed; there are not a whole lotta soft comfy curves. So I told my set designer, Mark Batell (he also plays Frank; this is community theater and everybody ends up doing double if not triple duty). He got it, and started refining my scribbles and asking all sorts of awesomely practical questions: does this door open in or out? Do people have to exit all the way off, or can they hide back there? What about sight lines and batttens, and will it matter if the plywood warps?

The trick, of course, is to hit the right balance. I’m not a fan of getting hit over the head by anything, and the play’s whole delight is the subtlety of it. So we’ll give it a shot.

Meanwhile, I believe I am on the verge of finding the missing piece to my cast. Fingers crossed for a complete group at tonight’s read-through.

Welcome to the Jig Saw blog. Over the next 10 weeks, I’ll be chronicling the production of this show by the great and underappreciated writer, Dawn Powell.

Why Jig Saw? (Which, by the way, Powell referred to in her diaries as “Jig Saw,” “Jig-saw,” and “Jigsaw”; I use the two words because that’s how the play appears in its one published version, as part of the collection Four Plays by Dawn Powell.)

Several years ago, I taught a literature survey class at Washtenaw Community College, where I currently continue to teach English. I decided to include Powell’s The Locusts Have No King as an example of a mid-century novel written by a woman; it replaced Death Comes for the Archbishop, which my students universally did not, to put it kindly, get.

I was amazed at the response to Powell. My roster was diverse on multiple levels, including age, socio-economic, and ethnicity, and of the five novels I chose, it was the clear favorite. Students were intrigued by it; one student thought it would make a great movie, updated from the publishing world of post-War NYC to present-day Hollywood.

Fast forward to 2011. My divorce prompted, as divorces do, some re-evaluation. A friend pointed out my artistic frustration, and through my teenage son’s involvement in theater, I realized I’d left behind my first love in order to make a living (as a digital creative). I started to look for ways to get re-involved in theater, including a show to direct and a venue that would give me a shot.

While I love Shakespeare, I didn’t it want to tackle it the first time out. I wanted to find a play with great roles, particularly for women, that was set in an interesting period, that was funny and well-written, and that hadn’t been done a million times. My eyes focused on that volume of Powell’s plays that had been sitting on my shelf, unread.

I liked the first one, Big Night, which had opened and closed after four days of savage reviews. I loved the second one. Jig Saw did better for Powell, running almost two months and snagging Spring Byington for the lead, as well as the wonderful but almost completely forgotten Ernest Truex and Cora Witherspoon as the main supports. If my students could connect to Locusts, surely the audience was not just ready but crying out for Jig Saw—even if they didn’t know it. And any time that I can introduce Dawn Powell to lovers of great literature is a good time in my book.

Next up: Inspirations and early ideas for the look of the show.